Store it? Just toss it into the pickup as you cut it up. Removing any ferrous metals (and there won't be much) as you go.
L

It's always sad to read of a plane being junked and scrapped.

I told you it would be a couple weeks before I had it out, then I had the mechanic in Virginia dump my Malibu in a field and damage it and spent the last two weeks suing the hell out of her and a road trip with two trucks and a chartered SEMI trailer to haul it all back.

The KX-155 is in a box to go out today. The racks and KI-209 will go out as soon as I can get the 180 moved to my storage area which I’m at the mercy of the salvage company who won’t answer their phones (AMF Aviation in Springfield, TN). I can’t pick it up or move it unless they give me a TIME as their lot is locked and secured. I’ve called 3 times a day every day since Wed of last week.

Lastly I have responded to ALL your emails except the most recent one you sent yesterday because I’m just now catching up with eMails. I have a day job and two side businesses and get 200-300 emails a day and it typically takes me 2-3 hours a day just to answer all my emails. Your last email took me 36 hours as well because I was on the road recovering the plane. If you want instant email returns you should probably buy new avionics from a dealer and even then with their 8-12 month back log you might not get instant responses, either.

I apologize for the delay but you let me know next time someone drops your nearly half million dollar airplane in a field forcing you to file insurance, deal with claims, lawsuits, sheriff’s offices, and organizing your own aircraft moving and recovery plan then executing on it yourself in person and let me know how much else you get done in the interim.

Ok. That being said, I'm in the market for the rocker switches. Available? Let me know. Thanks
R

I apologize to everyone but due to the guy who bought the KX155 then it appears charged it back through Paypal after 36 hours on a weekend without hearing back from me knowing things were crazy and stressful, there will be no part out.

Talking to BAS to come get the entire hull when I pull the parts I need off of it and people can buy at retail. Sorry I'm just stressed past my limit with having to get my plane back, sue that A&P, insurance trying to deny the claim, her not having hangar keeper's insurance, and taking a $25k savings account to near zero while I'm out on short term disability from work with knee surgery. My fault for not being able to execute when I thought I would but just too many things all blew up in one 72 hour period.

If someone else wants to make a bid on what's left of the hull and part it out, it's in Nashville. I have to rent a trailer and forklift next week to go get it now that I finally got Chris at AMF to call me back. He hasn't had time to give me a price to take it to my airport so I'm just going to have to rent the equipment and spend a day doing it myself.

Once I get the interior out of it, struts, and such, someone can come get the rest.

Sorry, just too much to deal with. Didn't realize the world was going to implode when I listed this. If someone wants to offer me something for it please contact me directly 615-210-5046. I'm getting offline for a few weeks until I can catch up with life and not have a stroke.
R

For anyone curious to know how this turned out, I got a very rude PM from one of the mods here gas lighting me and making demands of returning money before even asking me what was going on.

I was communicating with djbred18 and told him I’d go ahead and send the head unit until I had time in all this craziness to get the hull from AMF and pull the racks. He never responded so I checked PP before I sent the head unit - this was last Monday. He had already charged back his Paypal transaction WHILE he was emailing me over the weekend wanting me to send the unit RIGHT NOW.

He still has not responded 4 days later - he knows what he did.

Paypal didn’t tell me what had happened but by the amount it wasn’t hard to figure out. I emailed Paypal to confirm since there wasn’t a note by his money he sent and this is what I finally got back. (The $4,300 charge is me selling 3 Duke cylinders to a guy in Canada due to the Lycoming bad valves - he ate 2 in one flight and bent a 3rd, all on one engine so he made it down safely. I have a few old stock overhauled TIO-541 cylinders and parts. I’ll be refunding it when he sends me a check - done with Paypal).

In short, while he was emailing me over the weekend, without waiting for me to respond, he had already charged back the purchase and further when I told him I was sending the head unit ahead of the rack, had it boxed and was prepping a shipping label, he still didn’t tell me what he had done. He was hoping to get both the head unit and his money back.

This is again why I don’t want to sell parts. Someone can come get the hull when I’ve pulled the parts I need off of it, whoever that may be. I’ll be listing the radio over on Van’s when this is done if someone is interested still. I’d rather use Stein Air for testing and holding for their fee than pay Paypal another dime then have someone who lacks morals charge back their payment. Pretty much done with eBay and Paypal for fees and taxes and no protection as a seller from unscrupulous behavior. 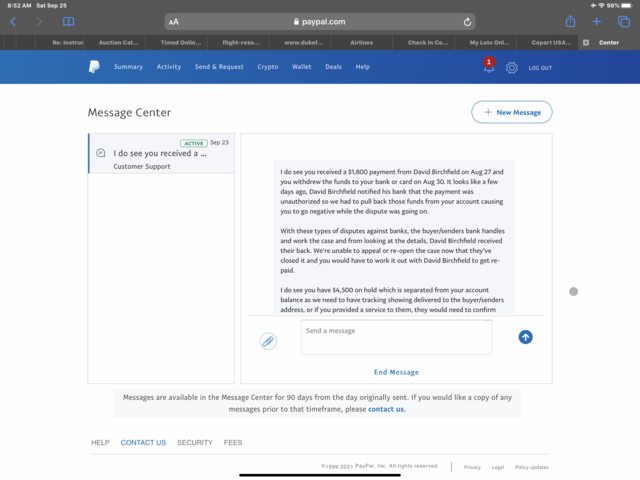