I mentioned in another thread that we were in the process of exchanging our KFC150 flight computer for the new Honeywell Bendix King KFC230. This system keeps the existing servos and servo wiring but upgrades the computer to presumably modern avionics standards. It has a touch screen to select the various modes. We went ahead with the install because we had a strong feeling that our computer was suffering age related failures.

The cost of the computer is $9600 and install was an additional $4000 (approx). It's not 'plug and play' and does require a fair amount of rewiring behind the panel. Thought it's not necessary to pull up floor panels etc. Installing the new computer comes with a 2 year warranty on the existing servos - however old they are. There is no need to have the servos overhauled.

In our aircraft we were interfacing the system to a Garmin G500 PFD/MFD combo so I did have some reservations about how this might turn out. There have been other post on this forum regarding mixing and matching fairly complex components from different manufacturers.

Anyway - I collected the aircraft today and flew it back from the installer to our home airport. I deviated a little bit to try out the various functions of the AP.

In short, albeit on the basis of one flight, I am delighted with the outcome. The autopilot worked perfectly and was rock solid. It perfectly tracked the HDG bug and rolled out smoothly on the selected HDG. VS mode was spot on - select a climb of 500fpm in VS mode and the system nailed 500fpm. Adjusting it up and down by a 100/200fpm then it rapidly captured the newly selected VSI. Tracking in NAV mode was perfect and I got the opportunity to fly a coupled ILS back into our home airport. It was exemplary. The aircraft captured the localiser and then the glide slope. Tracking both horizontally and vertically was spot on.

The CWS function worked really well. Hold CWS, select a new roll and pitch attitude, and release - and the aircraft just locked into the new attitude and held it. I tried some unusual attitude recoveries using the LVL function and that worked as advertised.

I was also pleasantly surprised by the amount of annunciation available on the PFD - considering that we are integrating a HBK A/P to a Garmin PFD.

All in all a very good outcome (so far) and my congratulations to our avionics engineer as this is the first one he has done. Indeed we think this is the first KFC230 install in the UK. The install manual was a bit on the 'thin' side. For example our installer initially could not get the flight director to display on the PFD. Multiple calls to HBK tech support were politely received but basically ended up with a gentle shrug of the shoulders and 'don't know'. It took 2 days of messing about inside the setup menus of both the KFC230 and the G500 for our engineer to find a setting hidden in a sub menu that was OFF and should have been ON (or the other way around). Once set correctly it all worked just fine. Out of interest he contacted HBK tech support to get a polite 'thank you, and we will update the install menu accordingly'....!

We did take the opportunity to have some additional work done to the P1 panel - our old vac driven standby AI had failed so we replaced it with a G5.

It's only done two flights since the install but so far we are very pleased. 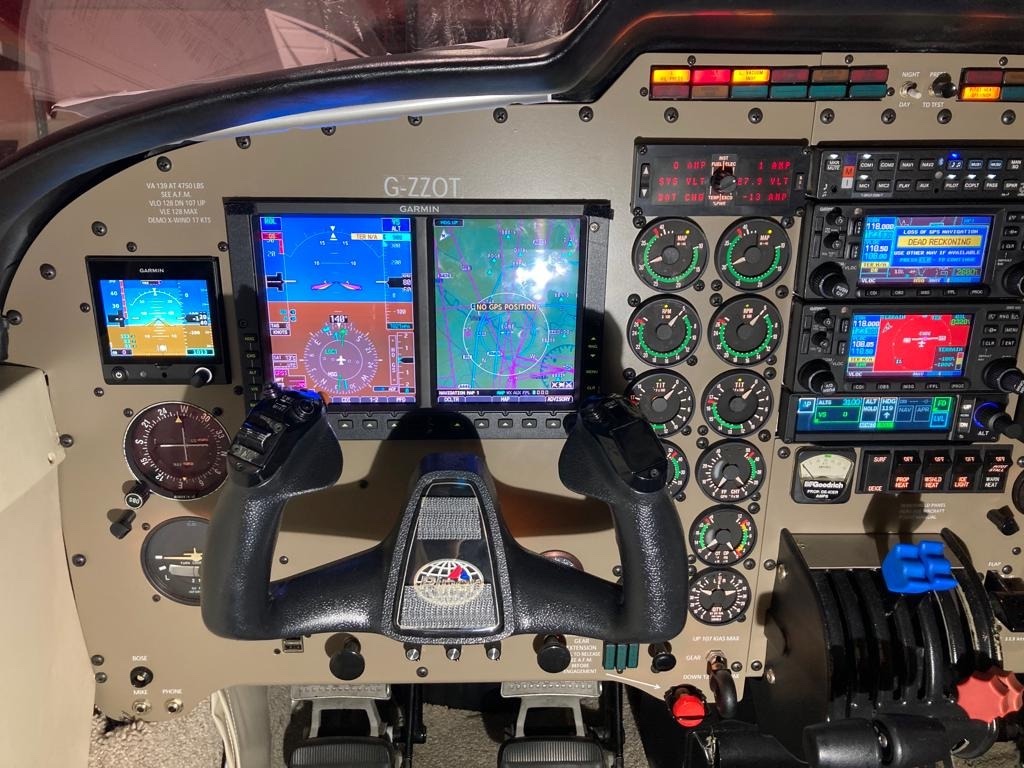