This is Apollo (Garmin) MX20 I/O MFD with traffic that was part of the L3 (BF Goodrich) i-linc avionics package. There is no difference between an MX20 and an i-linc unit. It was removed from my Seneca II for a panel upgrade. It was in perfect working condition when removed and immediately packed in a anti-stat bag and protective box. This is an I/O unit allowing active traffic as well as the Chartview option that allows loading and viewing geo-referenced Jeppesen charts and airport diagrams. These are both upgrades over a basic MX20 (i-linc) that greatly increase the value and functionality. It comes with a spare data card, both with nav data and Jeppesen charts from 2016. The latest was current in September when removed from my panel. I never installed a altitude encoder in my airplane so the ALT flag is visible in the photos. A serial encoder like an Icarus 3000 can be purchased used for between $50 and $250 and are easy to install which will feed altitude info to the MX20. Unlike the GMX200, the MX20 does not get altitude info from the GPS source.
I will also include the Pilots Manual and Installation Manual in digital pdf format with this unit.
This is a newer unit. It has a rocket on/off switch rather than the rotary knob used on the older units. It is labeled Apollo MX20 p/n 430-0270-801 mods: E by Garmin AT Salem, OR
$1600 with free shipping CONUS. It's also on eBay now

From Garmin website:
Offering an impressive list of features and nav graphic interfaces, the MX20 multi-function display is a fully integrated "big picture" pilot information center.
The MX20 MFD&#8217;s large active-matrix LCD display extends a full 6 inches diagonally, and its crisp 640 x 480-pixel screen offers the highest resolution in its class. At a glance, you can see your aircraft&#8217;s position and track on a VFR- or IFR-style navigation chart &#8212; with course lines, waypoints and flight progress displayed over realistic terrain depictions. For arrivals and departures, an exclusive ChartView&#8482; option lets you confirm your aircraft&#8217;s position on Jeppesen® instrument approach plates and airport surface charts. A unique split-screen feature enables side-by-side displays of any two MX charting functions.
Added safety is provided by a built-in terrain elevation database that color codes relevant ground features in relation to your aircraft altitude, alerting you as you approach rising terrain. The MX20 will also integrate with various onboard weather radar, lightning, traffic awareness and datalink systems that enable uploading of graphical weather information and NEXRAD radar depictions.
In addition, the MX20's custom map function is customizable. This lets you create a display for almost any configuration you require, offering extensive overlay capabilites. Other functions provide more limited levels of customization, retaining the look and feel of the instruments they reflect &#8212; an important safety feature.
You can interface the MX20 with most manufacturers&#8217; GPS navigation equipment. And when coupled to Garmin GPS and VHF nav systems, the MX20 provides extra features and levels of convenience that exceed those of systems costing many times more. No wonder pilots are choosing MX20 displays when they upgrade their avionics or purchase a new aircraft.
ChartView Option
With the exclusive ChartView option, instrument approaches and airport surface diagrams can be viewed on the MX20, with the aircraft position overlaid on familiar JeppView chart depictions. Standard Instrument Departure and Arrival charts (DPs and STARs) are also provided.
Split-Screen Feature
For multi-view situational reference, the latest MX20 software offers a unique split-screen feature, allowing side-by-side displays of any two MX20 charting functions. In addition, a vertical profile view of terrain peaks and obstructions relative to the current flight level can be displayed across the lower portion of the screen.

I can email more photos. For some reason I can only upload one photo. 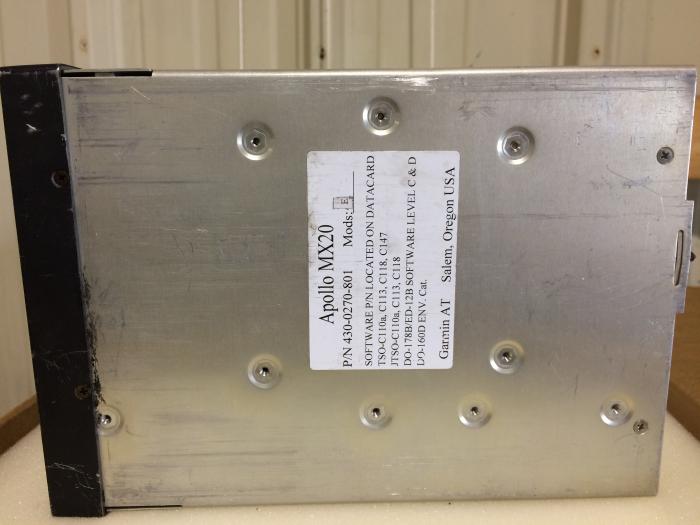 The MX20 can get altitude from the GPS if the "extended data" output format is selected on the GPS RS232 interface, so you don't need an encoder for the MX20.

Thanks Philiplane. I didn't know that was an option. The avionics shop that installed the unit told me it can only get altitude info through grey code from an encoder.
I reduced the price with free CONUS shipping. I think that's a pretty good deal for a nice I/O unit with Chartview activated
Last edited: Dec 24, 2016